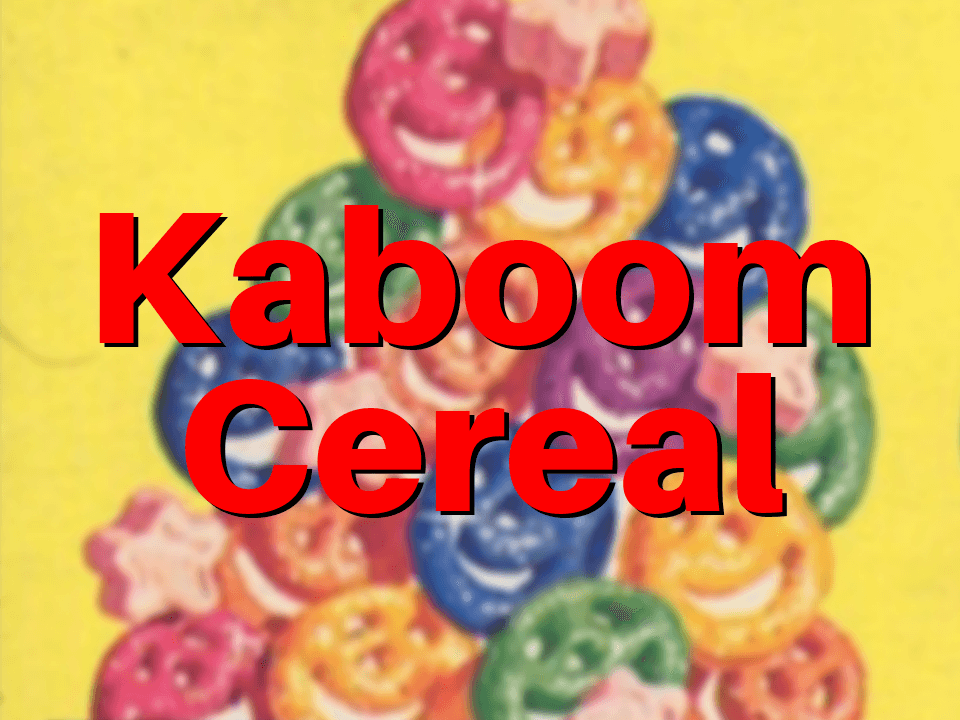 While Kaboom cereal is no longer available in grocery stores, this vitamin fortified sugary breakfast cereal has had a clear influence in the United States with numerous cultural reference in television, movies, and books.

Learn a bit about Kaboom history, the crazy circus clown mascot, these cultural references below. 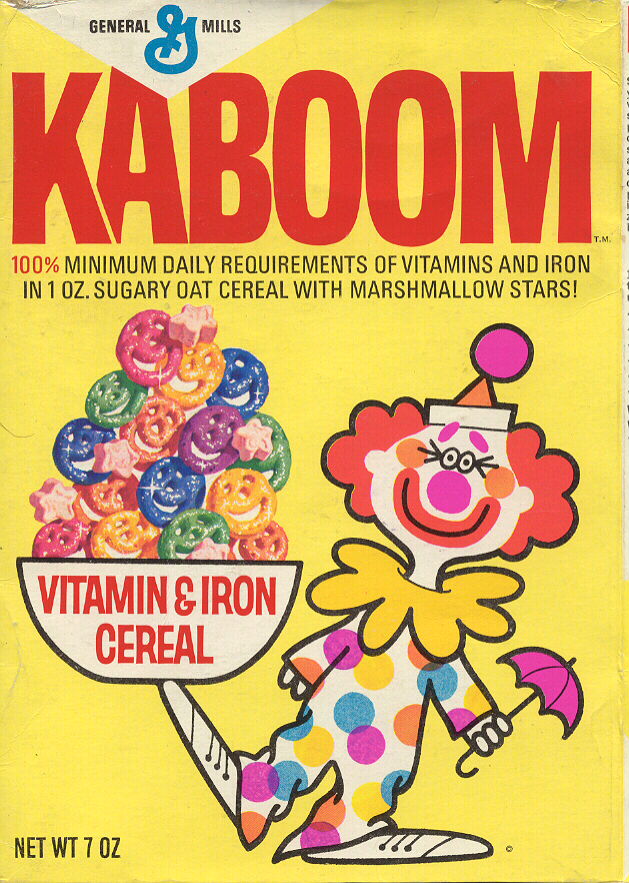 Kaboom remained available to purchase for 41 years until 2010 when it was discontinued by General Mills. This now defunct breakfast cereal is reminisced mostly by 70s and 80s kids which is when the cereal was most popular in the United States.

Also in the commercial, the clown finds a struggling ringmaster trying to lift an elephant. After feeding him a spoonful of Kaboom cereal, the ringmaster is able to throw the elephant high up into the air. 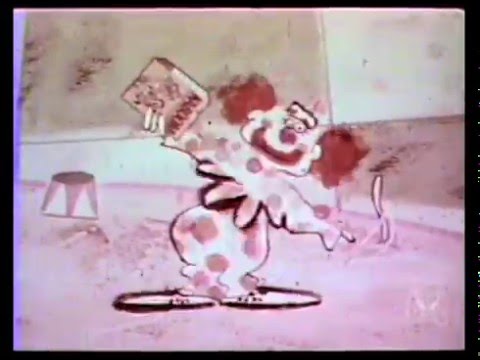 Obviously dramatized, the TV commercial makes an analogy that the vitamins and minerals in Kaboom cereal are supposed to make you strong like the ringmaster.

The first chapter of Don DeLillo’s 1985 novel White Noise references Kaboom cereal along with Waffelos as one of many items packed into station wagons pulling into a college campus for move-in day.

THE STATION WAGONS arrived at noon, a long shining line that coursed through the west campus. In single file they eased around the orange I-beam sculpture and moved toward the dormitories. The roofs of the station wagons were loaded down with carefully secured suitcases full of light and heavy clothing; with boxes of blankets, boots and shoes, stationery and books, sheets, pillows, quilts; with rolled-up rugs and sleeping bags, with bicycles, skis, rucksacks, English and Western saddles, inflated rafts. As cars slowed to a crawl and stopped, students sprang out and raced to the rear doors to begin removing the objects inside; the stereo sets, radios, personal computers; small refrigerators and table ranges; the cartons of phonograph records and cassettes; the hairdryers and styling irons; the tennis rackets, soccer balls, hockey and lacrosse sticks, bows and arrows; the controlled substances, the birth control pills and devices; the junk food still in shopping bags—onion-and-garlic chips, nacho thins, peanut creme patties, Waffelos and Kabooms, fruit chews and toffee popcorn; the Dum-Dum pops, the Mystic mints.

Vernita Green of Quentin Tarantino’s 2003 movie Kill Bill: Volume 1 uses a gun hidden inside a Kaboom cereal box in a failed attempt to kill The Bride. 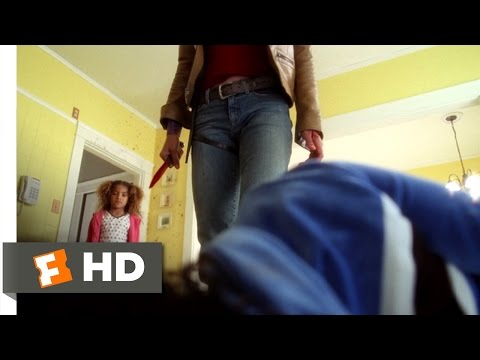 The main protagonist, Philip J. Fry voiced by Billy West, of the cartoon series Futurama compares the loss of a memory to the fact that Kaboom cereal is no longer available in season 7 episode 23 from 2013.

“I guess the memory’s gone forever… like Kaboom cereal.”

The music video depicts a man sitting down in his kitchen before work to eat a bowl of Kaboom. After pouring the cereal, he notices the clown faces begin to laugh in a scary manner. His gaze bounces back and forth between the cereal pieces and clown face on the cereal box. Eventually, the man goes crazy and appears running through what is probably a train station dressed in white from head to toe. 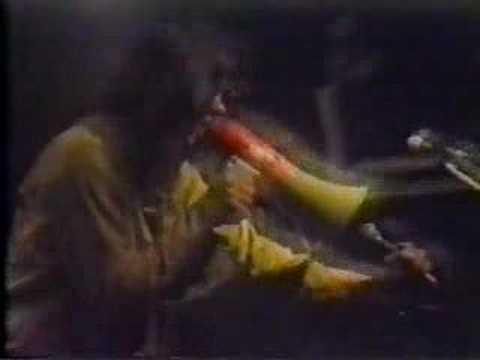 8. Mr. Rogers Passes by Kaboom in the Cereal Aisle

In an episode which originally aired on April 7, 1984, Mr. Rogers walks down the cereal aisle in a grocery store. Many vintage breakfast cereals including Kaboom are seen as Mr. Rogers walks by. 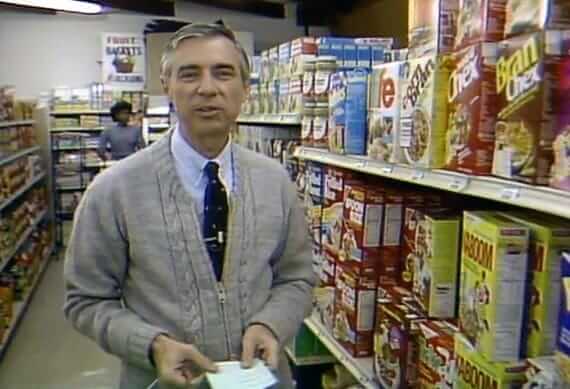 In an episode of Mary Tyler Moore called Just Friends which CBS originally aired on November 24, 1973, Ted Baxter the anchorman states that Kaboom and Cocoa Puffs are two of his favorite cereals.

In the Indestructible Man episode of Mystery Science Theater 3000, Joel Hodgson reads “cereal novels” while scooping spoonfuls of cereal. Based on the premise that kids love to read the back of cereal boxes, the show features “cereal novels” including: 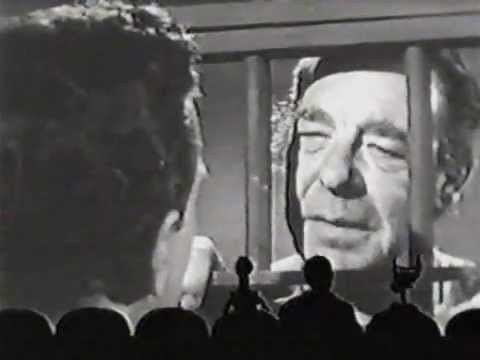 Are you a Kaboom fan? Let me know in the comments below. While I never had the opportunity to taste it, if General Mills ever decides to bring back Kaboom cereal, I would definitely give it a try.