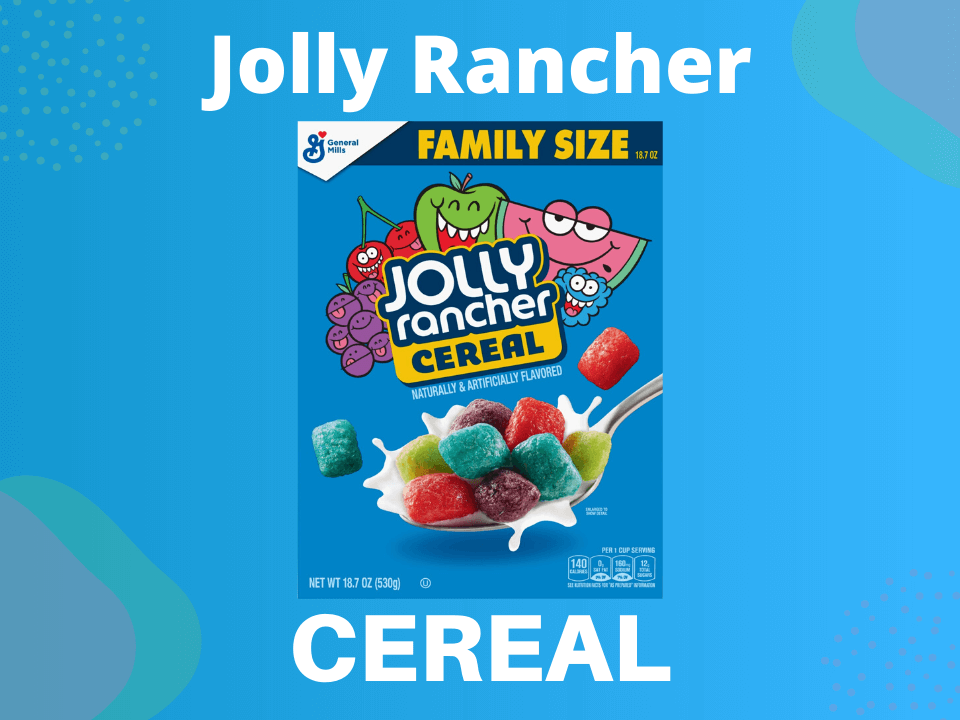 Candy for breakfast? Probably not something that is mother-approved, but General Mills did it anyway with Jolly Rancher Cereal.

Seventy years after the flavored hard candy first hit shelves, General Mills teamed up with Hershey’s to release this candy-inspired cereal in late 2019.

The big question on all of our minds… does it taste like the candy? Let’s find out.

Now if you think that this cereal will tastes like candy, you’re going to be disappointed. Instead, Jolly Rancher Cereal tastes more like a corn puff with a subtle fruity flavor. It’s sweet yes, but nothing like Jolly Rancher candy.

Contrary to the tagline on the back of the cereal box:

We’ve got a hunch that you’ll love it a bunch, ‘cuz we’ve got that fruity crunch!

In my opinion, the fruity crunch is rather disappointing. Do I want my cereal to taste like candy? Absolutely not, but the artificial taste just doesn’t resonate with me.

Just like the hard candy, the five flavors pictured on the front of the Jolly Rancher Cereal box are:

It’s odd that General Mills markets five flavors for the cereal though considering you’ll only find four different colors of cereal pieces: red, green, blue, and purple. While each cereal piece color generally tastes the same, my guess is that either watermelon or cherry was excluded.

A bowl of Jolly Rancher Cereal contains 140 calories per one cup serving. With just 1.5 grams of total fat, the cereal contains no saturated or trans fat.

While there is 160 mg sodium per serving (or about 7% of your daily value), the cereal contains no cholesterol.

Other than that, this sweet cereal has a good amount of sugar (more on that below) and is packed with added vitamins and minerals.

Although not available at the time of this writing, check General Mills’ website for full nutritional information. 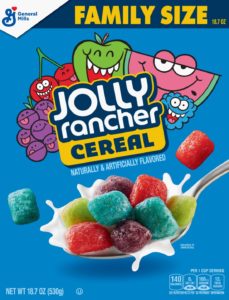 Before getting into the artificial flavorings and colors, the last “recognizable” ingredients you’ll find are canola oil and salt.

In addition, the cereal contains a bunch of added vitamins and minerals such as calcium carbonate, vitamin C, iron, and zinc among others.

Every spoonful of Jolly Rancher is composed of one-third sugar. While a serving of this sugary cereal is 36 grams, each serving contains 12 grams of sugar, all of which is added sugar.

Thanks to ingredients such as sugar and corn syrup, each and every box is over 33% sugar by weight. Not exactly the healthiest of breakfast cereals.

Although General Mills does not explicitly recognize it as gluten free, Jolly Rancher Cereal contains no wheat or soy ingredients. The cereal is corn based consisting primarily of whole grain corn and rice flour in addition to various sugars.

As always, gluten may still exist in the cereal from other ingredients. Additionally, if the facility also produces gluten-containing products, trace amounts of gluten may be present in the cereal. Because General Mills doesn’t market it as gluten free, those with a sensitive gluten intolerance should probably stay away from it.

Have you tried Jolly Rancher Cereal? Let me know what you think in the comments below. Although I’m The Cereal Guru, I personally limit my intake of sugary cereals like this for an occasional treat.

Also, if you enjoy reading about cereal, check out some of my other cereal blog posts here, including a blog post about Hershey’s Kisses Cereal, another sugary breakfast cereal from our friends at General Mills.