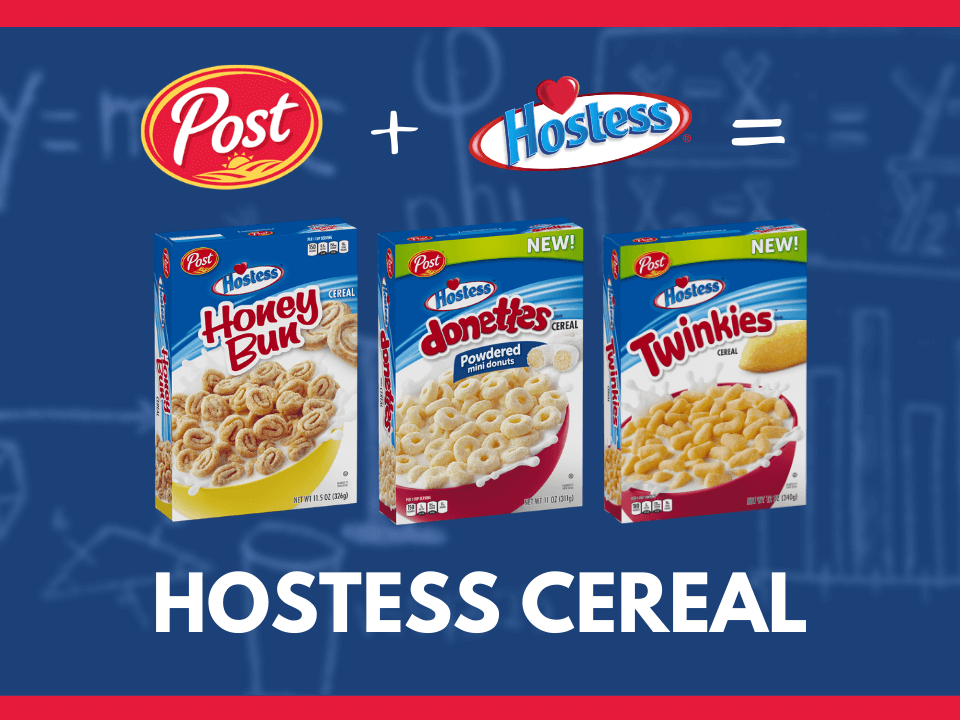 Through a series of collaborations between Post Consumer Brands and Hostess Brands, three new snack-inspired cereals were introduced to the breakfast aisle in 2019. These cereals include:

The Hostess cereal trio surely attempts to capitalize on America’s love of snack cakes, but the big question on everyone’s mind… what do they taste like? Let’s find out.

No, we’re not talking about Little Debbie here, but rather the Honey Buns from Hostess. This snack cake was the inspiration to the Honey Bun Cereal that was announced on January 11, 2019 alongside of Donettes Cereal.

From the original press release:

“Post Hostess™ Honey Bun cereal delivers the delicious taste of America’s favorite breakfast pastry right to your cereal bowl. Each Honey Bun-shaped piece is glazed to perfection, for a tasty cereal the whole family will enjoy.”

The announcement was followed by a rather small online video campaign. 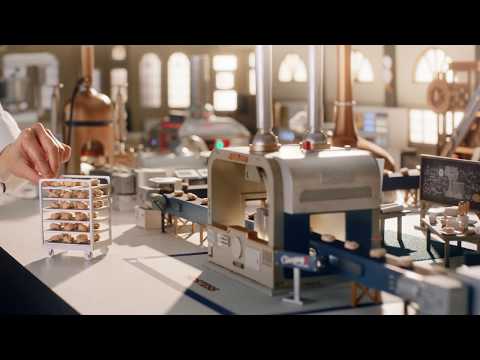 I personally like the Donettes and Twinkies promo videos much better than this one, but more on that later.

A lot of cereal critics who have reviewed Honey Bun cereal agree that it tastes very similar to Cap’n Crunch. A notable difference is the recognizable taste of honey, which is in fact an ingredient.

On the other hand, you will also taste a bit of cinnamon which interestingly enough does not appear on the ingredients list.

Putting the taste aside, these crunchy cereal pieces are indeed shaped like a proper Honey Bun snack cake with the classic circular swirl.

To date, a cereal with one of the highest concentration of sugar is Honey Bun cereal. With over 48% sugar by weight, Honey Bun cereal is not the healthiest of breakfast foods.

That means nearly half of every spoonful of the cereal is sugar! I guess this makes sense since the first ingredient is sugar.

Even still, the cereal is a much healthier option than the snack cake itself which has 550 calories and 27 grams of sugar per serving.

Now other than sugar, a couple pieces of nutritional information worth mentioning is Post’s attempt at making this cereal healthy by adding vitamins and minerals. You can find everything from niacinamide and zinc oxide to calcium pantothenate and hydrochloride on the ingredients list.

You’ll also find at the bottom of the side panel a note stating PRODUCED WITH GENETIC ENGINEERING. This clearly means that Honey Bun cereal is not an organic food as most of us would have probably guessed.

On a similar note, Honey Bun cereal is probably not gluten free either as it contains whole grain oat flour (most likely processed in a facility that also processes wheat) and is not marketed as such.

Finally, as per the usual with these types of breakfast cereals, it’s made with a few artificial colorings such as Red 40, Yellow 5, Blue 1, and Yellow 6.

Next up, we have the Hostess Powdered Mini Donuts snack cakes as the inspiration for Donettes Cereal which was also announced on January 11, 2019 alongside of Honey Bun Cereal.

From the original press release:

“Inspired by the snack favorite, Post Hostess™ Donettes™ Cereal is the perfect addition to your breakfast table. Each spoonful features the Donette™ shape, rich taste and delicious powdered sugar coating of this cherished baked good that Donette™ fans will love.”

Another video promoting the release of the cereal shows the even further miniaturization of these already mini donuts inside a fictitious tiny cereal factory. 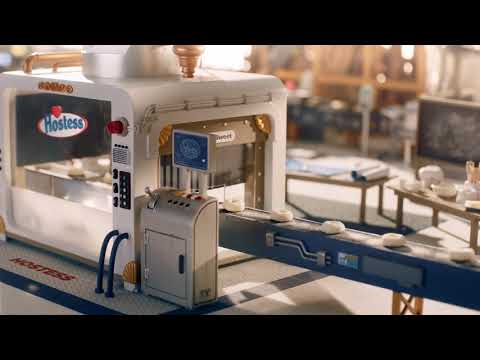 For some reason, this video clip reminds me of Willy Wonka’s chocolate factory.

Donettes cereal pieces look like Cheerios, but larger and covered in white powder. Fun fact: the proper name for the shape of a donut (or Cheerio for that matter) is a torus.

What about the taste? Does the cereal taste like a Donettes cake snack? Well, not exactly.

Most will describe the taste of the cereal as powdered sugar.

Obviously, right out of the box, the cereal is crunchy. I guess if you want that soft texture, you’ll have to let it soak in some milk for a couple minutes, although, this will probably result in a soggy mess.

Donettes Cereal is made up of over 40% sugar. With ingredients such as dextrose, sugar, and corn syrup, it’s no wonder that this is the case.

As you might guess, all 17 grams are added sugar. Surprisingly though, the cereal has more sugar than a serving of the original Donettes which have 15 grams of sugar per 4 donuts. So from a sugar perspective, you’re better off eating the actual donuts.

Just like most other cereals, Post has added a bunch of vitamins and minerals to make this cereal appear as if it has some nutritional value. You got everything from ferric orthophosphate to folic acid.

This cereal is also a GMO product as the side panel has the statement PRODUCED WITH GENETIC ENGINEERING.

This time however, Post explicitly marketed Donettes Cereal as containing wheat. Because of ingredients like wheat flour and probably whole grain oat flour, this cereal is not a gluten free food.

Lastly, because this cereal is so white, it has no artificial colors in the ingredients list.

Post released Honey Bun and Donettes Cereal to the market in January 2019, but it wasn’t until November 13, 2019 that Post made the announcement about Twinkies Cereal. In the press release, Post stated that Twinkies Cereal would hit grocery store shelves in late December 2019.

Part of the Twinkies Cereal announcement was a few words from Josh Jans from Post:

“In developing a cereal version of the iconic Twinkies, our top priority was focused on delivering the great Twinkies flavor in each bite,” said Josh Jans, Brand Manager of Cereal Partnerships at Post Consumer Brands. “Knowing that taste remains the No. 1 purchase driver of cereal, we conducted multiple consumer tests, and the new Twinkies Cereal delivered. We think fans will find that it not only tastes great with milk but also outside the bowl.”

So according to Josh, this means that Post did it’s due diligence to perfect the recipe for this cereal to make it taste as close to a real Twinkie as possible. But what do the consumers actually think?

We’ll definitely get into this below, but first, yet another Post promotional video from the miniature cereal factory, this time for Twinkies Cereal. 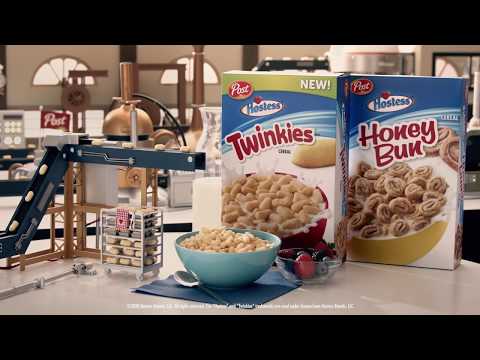 The big question:  what does Twinkies Cereal taste like? While many consider Twinkies to be their flagship product, it’s important for Hostess to get the taste right.

Most, including John himself, agree that the cereal doesn’t really taste like a Twinkie snack cake. Not only does it lack the creme filling, but the texture is crunchy, and flavor is just not the same.

You’ll find that people describe the taste as butterscotch, vanilla, and/or caramel, but when we reference the ingredients list, none of these ingredients can be found.

What Post did get right is the shape of the cereal pieces. They very much look like your typical Twinkies snack cake, but perhaps a bit less of that yellow color.

More Sugar Than a Real Twinkie!

Of all the Hostess cereals, Twinkies surprisingly has the least amount of sugar. Each 39 gram serving contains 16 grams of sugar. That means that every spoonful of Twinkies Cereal contains 41% sugar by weight.

Compared to an actual Twinkies snake cake which contains around 14.5 grams of sugar, the cereal actually has more sugar.

This comes as no surprise considering the first two ingredients of the cereal are dextrose and sugar. You’ll also find corn syrup on the ingredients list as well.

In yet another attempt to make this cereal appear as if it’s healthy, Post fortified it with lots of vitamins and minerals like zinc oxide and thiamin mononitrate.

Similar to the other Hostess cereals, Twinkies Cereal is also a GMO product as the side label includes PRODUCED WITH GENETIC ENGINEERING below the ingredients list.

Twinkies Cereal is explicitly marketed as containing wheat because of ingredients like wheat flour and probably whole grain oat flour. It’s for this reason that Twinkies is not a gluten free cereal.

Last but not least, to achieve that dull yellow (almost colorless color), Post used a couple of artificial colors including Yellow 5 and Yellow 6.

What is your favorite Hostess cereal? Have you tried them all? Let me know down below!