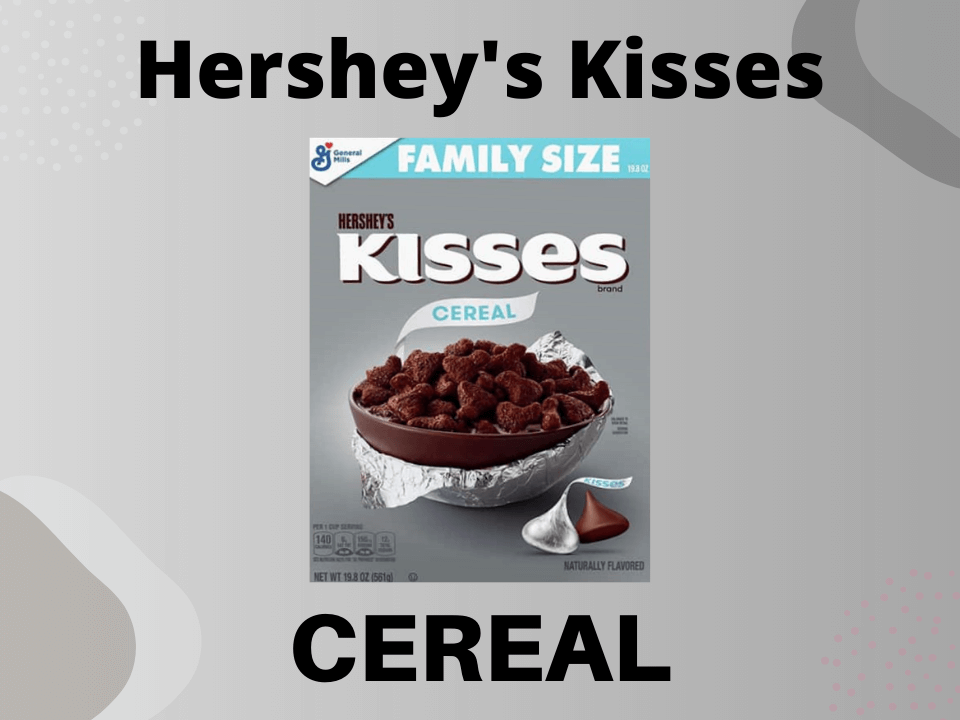 The Hershey Company, an iconic Pennsylvania brand, has teamed up with General Mills, to produce Hershey’s Kisses Cereal. This chocolate flavored corn puff cereal is actually made with real Hershey’s ingredients, but does it taste like a Hershey Kiss?

In what was anticipated to be an early 2020 launch, this chocolaty cereal has already hit grocery store shelves. At Walmart, the 19.8 oz family size box sells for $3.64. Prices may will vary by location and size.

While the shape of the cereal pieces are similar to that of a Hershey Kiss, the taste isn’t quite the same. Rather, Hershey’s Kisses Cereal tastes similar to General Mills’ Cocoa Puffs. Never had Cocoa Puffs? Think of cocoa power, but slightly sweeter.

Without milk, the cereal tastes a bit dry and powdery (duh!), but by adding milk, you get that “creamy” milk chocolate flavor. Still, not quite the same as eating a Hershey Kiss, but not bad either.

A bowl of Hershey Kiss Cereal contains 140 calories per one cup serving. With just 1.5 grams of total fat, the cereal contains no saturated or trans fat.

While there is 150 mg sodium per serving of the cereal (or about 7% of your daily value), Hershey Kiss Cereal contains no cholesterol.

Other than that, the chocolate cereal has a good amount of sugar (more on that below) and is packed with added vitamins and minerals.

Although not available at the time of this writing, check General Mills’ website for full nutritional information. 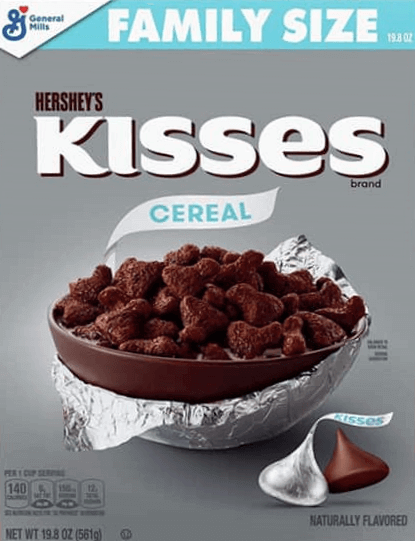 This cereal is named as such because it contains real Hershey’s chocolate. While the main ingredients in this cereal are whole grain corn, sugar, corn meal, and corn syrup, you don’t find a Hershey-specific ingredient until fifth on the list. According to the ingredients list, Hershey’s cocoa processed with alkali appears to be Hershey’s contribution to the cereal.

In addition, the cereal contains a bunch of added vitamins and minerals such as calcium carbonate, vitamin C, iron, and zinc among others.

Hershey’s Kisses Cereal contains a good amount of sugar. In fact, Hershey Kiss cereal is over 33% sugar by weight. While a serving of the sweet cereal is 36 grams, each serving consists of 12 grams of sugar.

That means that each spoonful of Hershey’s Kisses Cereal is 33.3% sugar thanks to ingredients such as Hershey’s cocoa, sugar, corn syrup, and unsweetened chocolate.

Although Kellogg’s does not explicitly recognize it as gluten free, Hershey Kiss Cereal contains no wheat or soy ingredients. The cereal is corn based consisting primarily of whole grain corn and corn meal in addition to various sugars.

As always, gluten may still exist in the cereal from other ingredients. Additionally, if the facility also produces gluten-containing products, trace amounts of gluten may be present in the cereal. Because Kellogg’s doesn’t market it as gluten free, those with a sensitive gluten intolerance should probably stay away from it.

Have you tried Hershey’s Kisses Cereal yet? Let me know what you think in the comments below. I know I’m The Cereal Guru, but I personally save sugary cereals like these for an occasional treat.

Also, if you enjoy reading about cereal, check out some of my other cereal blog posts here, including a blog post about Smorz Cereal, another chocolaty breakfast cereal, but this time from our friends at Kellogg’s.

5 thoughts on “Hershey’s Kisses Cereal — Does It Taste Like a Kiss?”