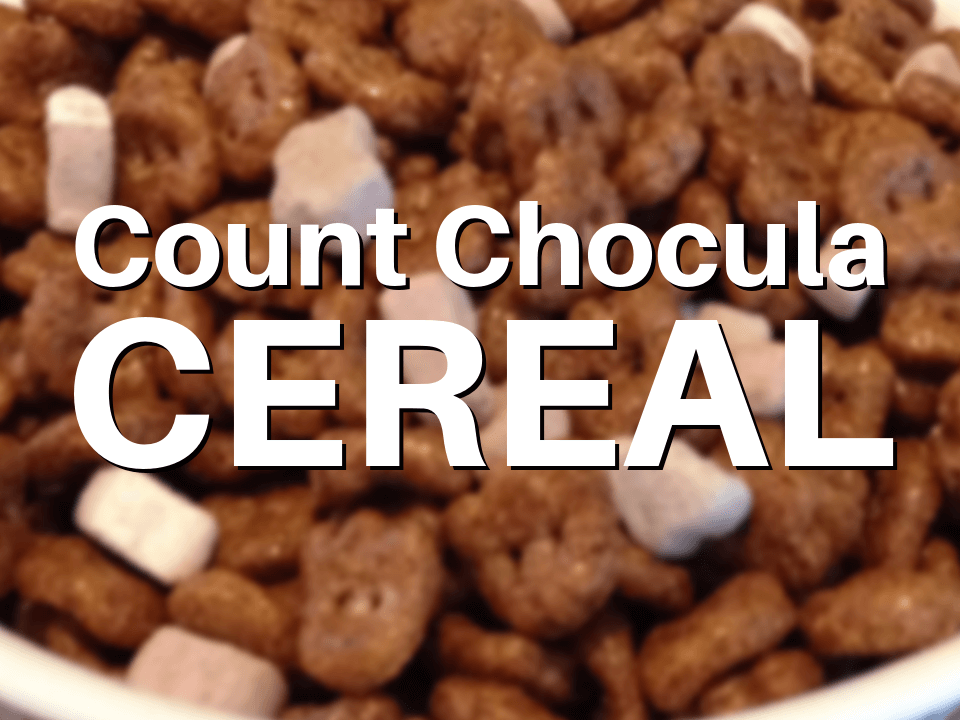 Inspired by Count Dracula from classic horror films, Count Chocula is a seasonal chocolatey cereal with monster marshmallows. As part of the trio of monster cereals from General Mills, this cereal has been around for close to 50 years. You can still buy Count Chocula cereal in most grocery stores around halloween.

Learn about Count Chocula cereal below including the cereal’s history, nutrition information, where to buy, and more.

Both the Count and Franken Berry cereal were introduced in March 1971 by General Mills. At the time, these were the only chocolate and strawberry flavored cereals on grocery store shelves. 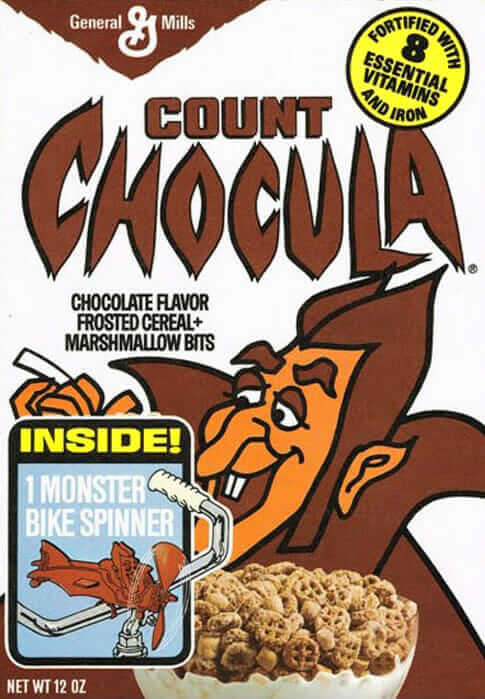 George Carn, the same artist that drew the Trix Rabbit, created the first images of the Count Chocula cartoon character in the early 70s.

3. Count Chocula Gets a Makeover by Marvel and DC Comic Book Artists

Married couple, Terry and Rachel Dodson, who have worked on DC’s Wonder Woman and Marvel’s Spider-Man, redesigned Count Chocula in 2014 for a limited edition cereal box. While most wouldn’t consider him scary, the Count appears more menacing than in previous versions.

Cereal pieces for the three monster cereals were initially cylinder-shaped with a cross in the middle. Now, each monster cereal brand has its own character shapes. Count Chocula marshmallows look like flying bats.

In 2018, General Mills went to Hollywood to source ideas for a movie, short film, video, or whatever piece of content featuring the monster cereal trio. General Mills created a website called WorkWithTheMonsters.com. The website prominently asks Hollywood for their help by stating:

6. A Whimsical Way to Start the Day

Below is a General Mills promotion for Count Chocula cereal from 2010.

A spoonful of spooky fun in every bowl, Count Chocula is a whimsical way to start the day. Made with whole grain corn, Count Chocula combines chocolaty cereal with colorful marshmallow shapes to create a delicious cereal that kids and adults can enjoy. Each serving of this playful, monster-themed cereal is low in fat with no cholesterol or saturated fat. It’s also a good source of calcium, whole grain, and 9 other essential vitamins and minerals.

This television commercial from the 1970s depicts the Count, Boo Berry, and Fraken Berry playfully arguing with each other on a beach as to which of their cereals is the best. After the Count and Fraken Berry team up and throw Boo Berry in the waves, he reappears from under the sand to scare them away. 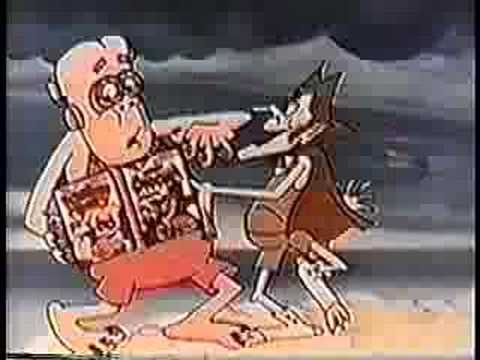 The second half of the commercial promotes Mini Monsters—a series of five cereal box toys which appear to be small plastic figurines. The narrator encourages kids to “trade them with friends and put on a show”.

Similar to a typical vampire exclaiming “I vant to suck your blood”, Count Chocula’s tagline was “I vant to eat your cereal”. As a pun on the vampire Count Dracula impersonated by Bela Lugosi, this Count Chocula tagline lasted from 1971 to 2010.

While most of the time he’s referred to as just Count Chocula, his full name is actually Count Alfred Chocula.

10. Fans Could Vote for Count in the Monsters Vote 2016 Election

During the 2016 presidential election in the United States which happens around the same time as halloween, General Mills created the Monsters Vote 2016 election where fans could vote for their favorite monster cereal. The Count Chocula cereal box encouraged fans to “Vote for Count”. 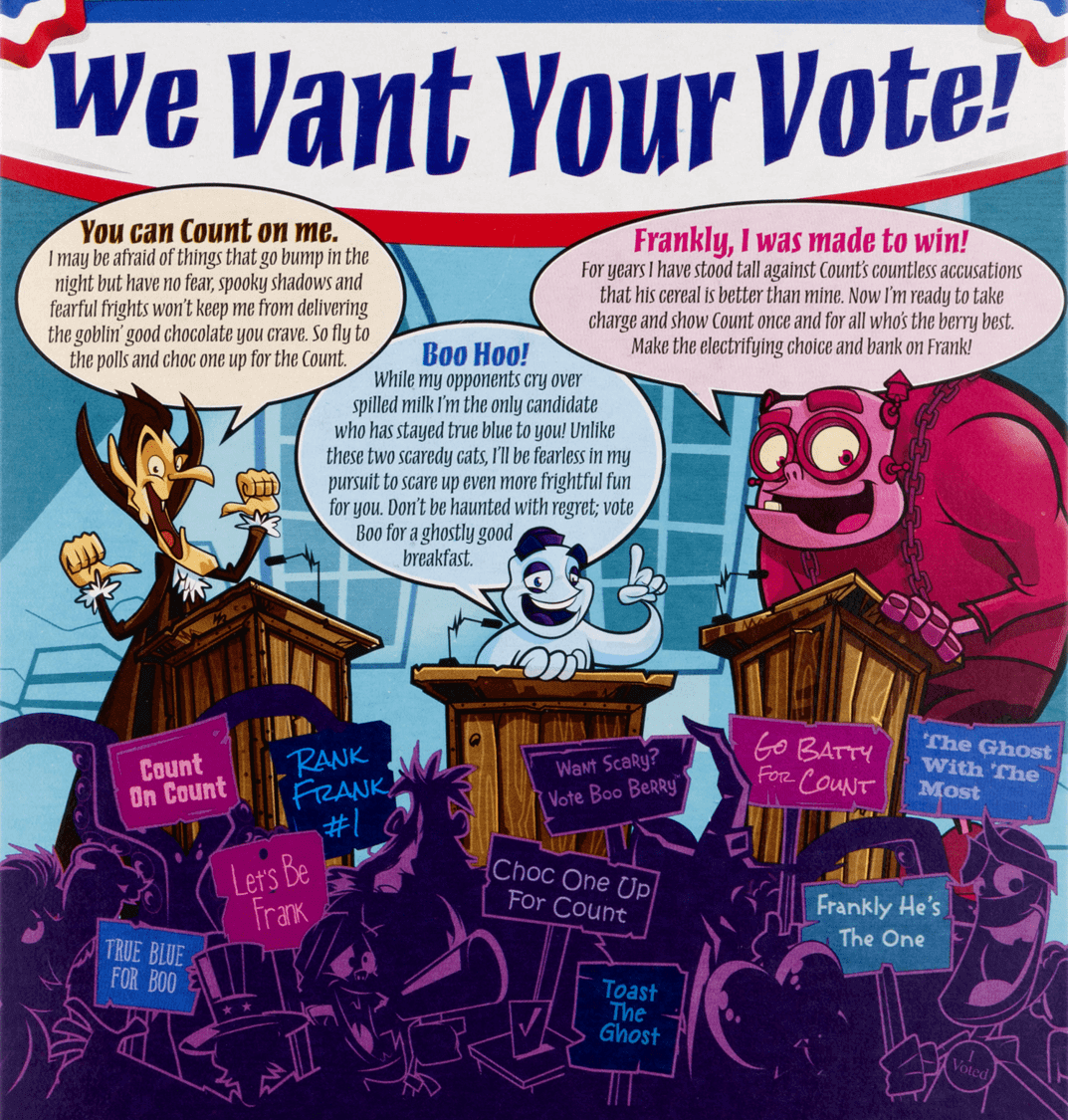 On the back of the monster cereal boxes, the Count stands behind a podium alongside Franken Berry and Boo Berry with a text bubble that reads:

You can Count on me. I may be afraid of things that go bump in the night but have no fear, spooky shadows and fearful frights won’t keep me from delivering the goblin’ good chocolate you crave. So fly to the polls and choc one up for the Count.

While these chocolatey cereal bars with spooky-fun marshmallows treats are not currently available to buy, Count Chocula Treats were a fairly unhealthy snack from General Mills. With ingredients such as sugar, corn syrup, fructose, refiner’s syrup, and high fructose corn syrup, it’s no wonder these cereal bars never lasted on grocery store shelves. 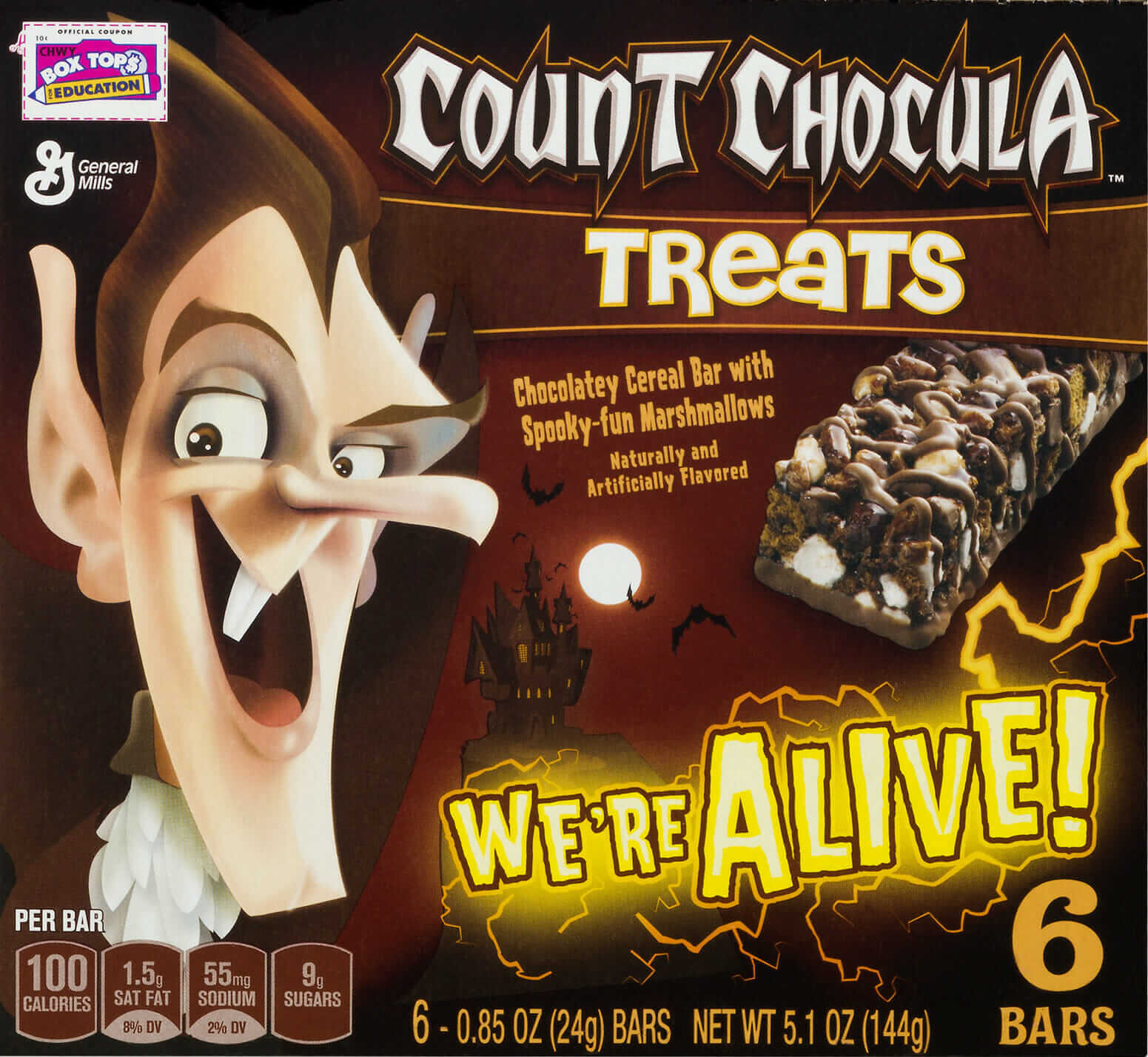 While both monsters are bickering back and forth, a young boy walks by and says hi. The monsters, who are actually timid and easily scared, are noticeably frightened by the little boy. 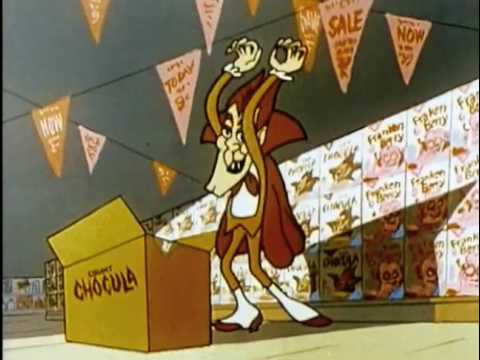 The commercial ends with a shot of a box of Franken Berry and Count Chocula on a breakfast table behind respective glass bowls of each cereal.

In 1987, General Mills superimposed a black and white image of Bela Lugosi from the 1931 Dracula film on the Count Chocula cereal box. The cereal box looked great; however, there was one problem… the six-pointed necklace that Dracula was wearing ended up looking like the Star of David.

The fact that Dracula appeared to be wearing the Star of David upset many from the Jewish religion.

Not too long after their release in October 1987, General Mills apologized for their oversight.

As a result, General Mills redesigned the cereal box cover and removed the offensive necklace from Dracula’s neck. 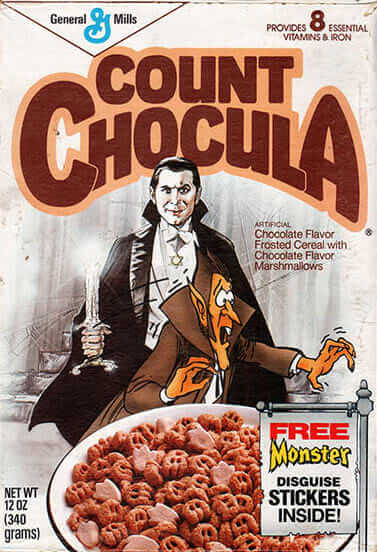 Are you a Count Chocula fan? Let me know in the comments below. Of the three monster cereals, I’d probably pick Count Chocula as my favorite as I am a lover of chocolate.