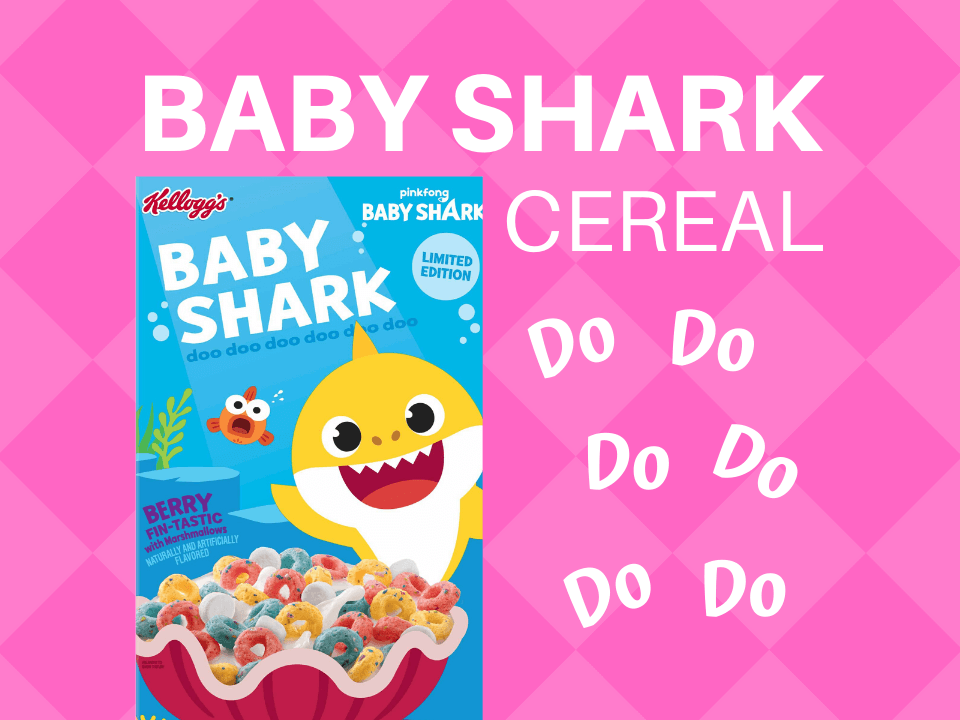 A 2 minute YouTube video from a South Korean educational entertainment company has inspired an American breakfast cereal. That’s right, Kellogg’s has the bragging rights as they have licensed the Baby Shark name from Pinkfong and created a breakfast cereal geared towards kids.

For those of you living under a rock, the Baby Shark video has been viewed on YouTube over 4.5 billion times. This shockingly catchy music video depicts two Asian children dancing amongst cute shark cartoon characters.

Wether you’re a fan or not, you can’t ignore the fact that a multi-billion dollar company has leveraged the popularity of this YouTube video and turned it into cereal.

Inside the box, you’ll find yellow, pink, and blue loops representing Baby Shark, Mommy Shark, and Daddy Shark. These berry flavored loops are sprinkled with some sort of blue glitter (not sure what that’s supposed to represent). Also amongst the “Berry Fin-Tastic” cereal pieces are white marshmallows.

Unfortunately, the entire shark family wasn’t included as Grandma and Grandpa were left out; although they do get a shoutout on the side panel. Also, it’s too bad that Kellogg’s chose loops (very similar to Toucan Sam’s Froot Loops, another Kellogg’s cereal). I think a better option would have been shark shapes.

While Baby Shark Cereal has a distinct berry flavor, each color tastes the same. In other words, pink and blue have the same flavor as yellow.

On the other hand, the berry loops also quickly soften up in milk, resulting in soggy cereal. For some, this is preferred, but for me, I am not a fan of soggy cereal. 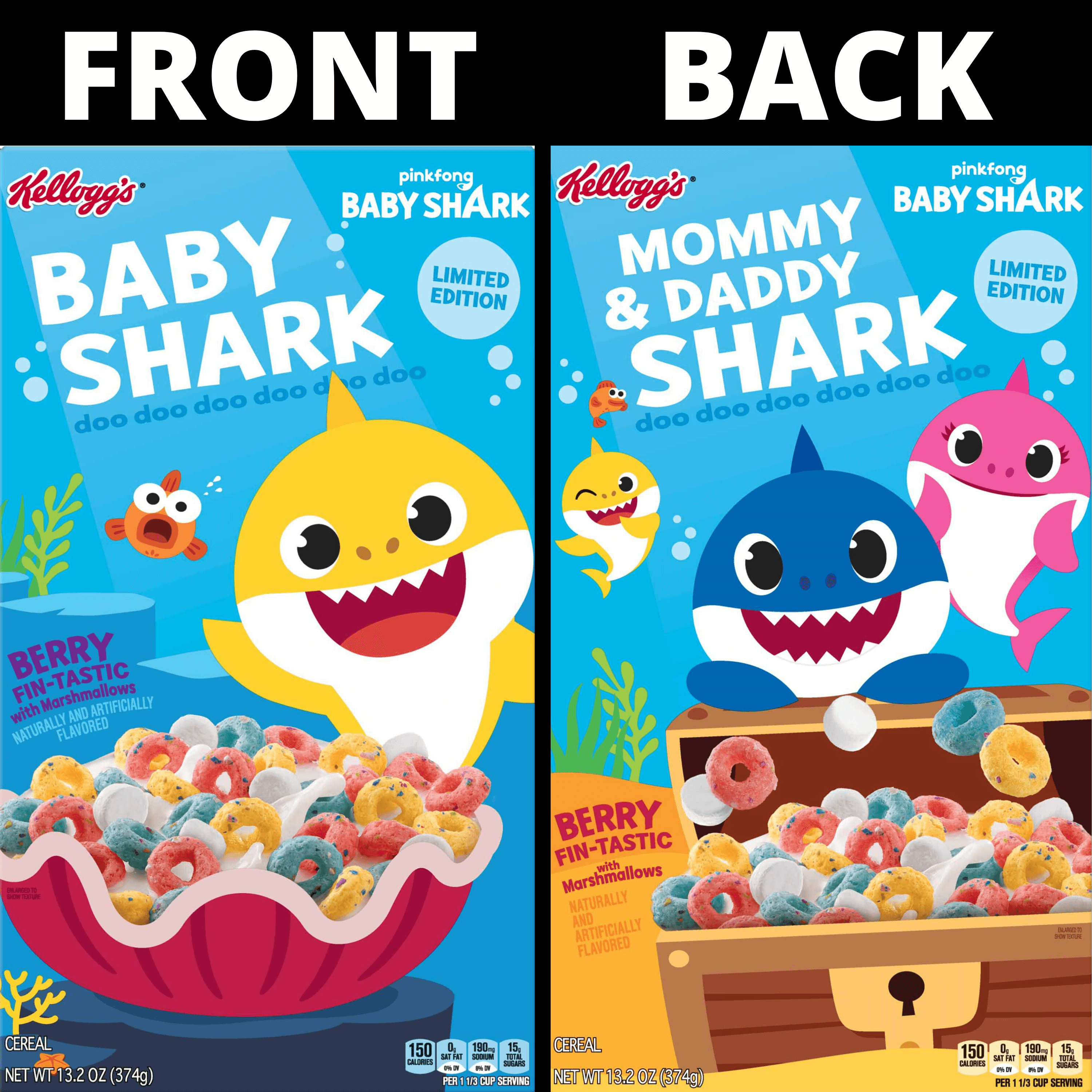 The front of the cereal box features Baby Shark and his best friend William the fish. While Baby Shark is happy and smiling, William seems to be frightened. In front of them is a bowl of colorful Baby Shark cereal and milk in a big red seashell.

On the back of the cereal box is Daddy and Mommy Shark behind a treasure chest filled with Baby Shark cereal and milk. Then off to the left in the background, you can see Baby Shark winking and a more relaxed William the fish.

On the side panel of the cereal box, Kellogg’s introduces you to the Baby Shark family (even though I’m pretty sure everyone knows Baby Shark by now).

Initially, I wasn’t sure where the name William came from. After some research, I found a video on Pinkfong’s official Facebook page introducing everyone to “the super duper trio of the ocean”. Indeed, William is the name of the orange fish. Even more surprising: Baby Shark’s real name is Ollie.

Trio of the Ocean | Sing Along with Baby Shark

Meet Ollie, the Baby Shark, ChiChi, the baby Hammer-head Shark and William, the fish! The trio of the ocean are off for an adventure!

When we talk about nutrition facts, there’s an anticipation that the food is healthy. Unfortunately that’s not the case for Baby Shark Cereal.

Even still, Kellogg’s tries to market the cereal as healthy. On the top of the package, you’ll find a green banner stating “Simple Inside” and below Kellogg’s boasts:

While this is great, I personally feel that it gives the impression to uneducated buyers that the cereal is good for their kids when in reality it’s not. Eye-catching labels like this are a marketing and advertising team’s speciality.

Worst of all, this naturally and artificially flavored breakfast cereal is targeted at kids.

Don’t even get me started with sugar. Every spoonful of Baby Shark is over one-third sugar. While a serving of this cereal is 39 grams, each serving contains 15 grams of sugar, all of which is added.

Thanks to ingredients such as sugar, corn syrup, and dextrose, each and every box is over 38% sugar by weight. Not exactly the healthiest of breakfast cereals.

No. Kellogg’s explicitly states below the ingredients list that Baby Shark Cereal contains wheat ingredients, primarily due to the inclusion of wheat flour. 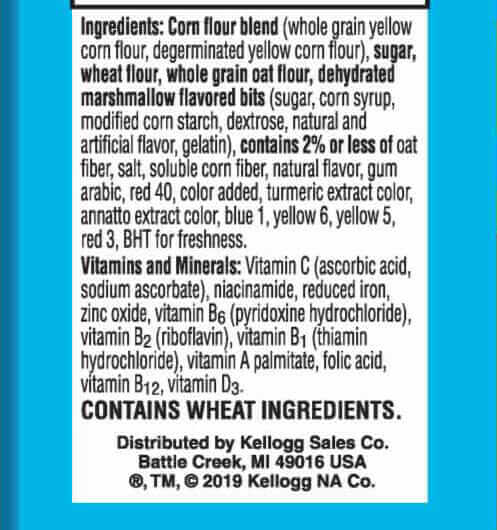